In this second trial run I decided to do away entirely with the driver circuit. I think there was a bad impedance mismatch which was limiting the power that could be delivered to the transducer, and being quite happy with the performance of this little amp I decided to try a direct connection to the 100v(max) output of the amp – this made an enormous difference to the delivered power.

The ultrasonic transceiver pair arrived today and I was able to use these like a conventional non-contact microphone in close proximity to the flask (I really need another retort stand..). These are just £2 conventional ultrasonic receiver and transmitters, that you’d find in the old fashioned ultrasonic remote control devices. These are 25khz rated, i.e. their peak sensitivity is around 25khz – which is perfect, you can also get 40khz ones, but wouldn’t be as sensitive, have to locate the data sheet for these..

The amp was wired to the flask with screened cable, necessary since we’re dealing with high frequency, high amplitude signals that will happily radiate into the environment and screw up any measurements. 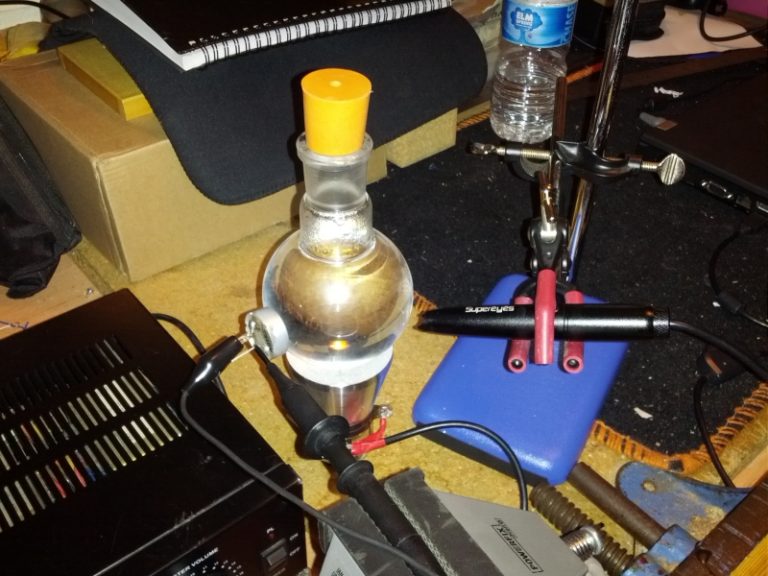 The flask was filled with ordinary tap water. The output volume of the amp was set to low, and the frequency generator adjusted until acoustic resonance was detected by the “mic” as before. This happened to be around 25khz again, since this is just a trial I’m not recording the specifics. Interestingly, it was found that placing the rubber bung in the flask produced a much stronger acoustic resonance (x3) at the same frequency, than a bungless flask – this flask model resonates very well.

Increasing the amplitude of the signal led to an interesting change in activity in the water, magically strange wispy filament streamers appear around nucleation points in the flask, some appeared in the centre of the flask and danced around. This was accompanied by a terrible screeching wailing sound.

Here is some footage of the effect:

I could see bubbles forming and hovering in the water at certain points, I wondered if there was sonoluminescence occurring at these points. Turning off all the lights and using a little video camera I was able to capture this, probably the most exciting pixels I’ve seen in a while. Actually the footage I took is dotted with these little bright flashes from within the flask – this is multi-bubble sonoluminescence. The next phase is to attempt single bubble sonoluminescence in trial, then we’ll be able to start doing some proper experiments. To do this I first need to degas some water…